The Ramblings of a Bush Philosopher 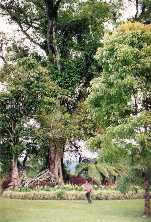 It's a fascinating and very diverse country, held together - for the present - by a government in which corruption is the norm and by a military that is not reluctant to use brutality against its own people. The peoples of different regions have different natures, different artistic abilities, different religions, different attitudes to outsiders. Most of Indonesia is oppressively hot for Caucasians; it can be frustrating, the people annoying, sometimes seemingly only interested in your money (and they can be very friendly and obliging); but if you do visit, you will remember it.

These photos and reminiscences are from a visit in about 1994.

Click on the pictures that have a bright border to see them full size. Then use the 'back' button to return to this page. Photographs of other areas or subjects are available via the home page.
Indonesia is a land of volcanoes! 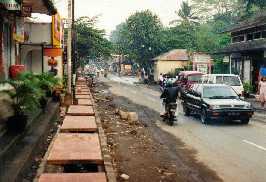 A street scene in Ubud.

Ubud is in the interior of Bali, and is well known as a centre for the arts.

Work was plainly under way on the footpaths, but no one seemed to be in any hurry to get the job finished. 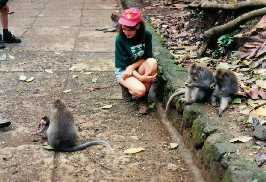 Within walking distance of Ubud is the Monkey Forest. The monkeys are cute, not much afraid of people, but bite if it suites them.

One stole my pocket diary and nipped me when I took it back. 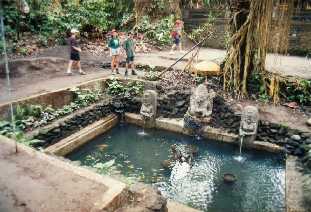 In the Monkey Forest is a temple with a pool.

The shade and the flowing water give some relief from the normal humid heat of lowland Indonesia.

I had a problem with the focus on my camera. This photo is not clear enough to allow an enlargement. 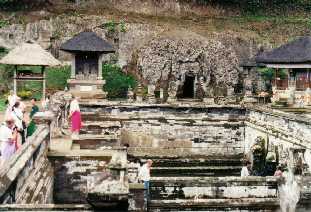 This temple was lost for many years. That's hard to imagine in an island the size of Bali, inhabited by two million people. How would it be possible to loose something the size of a temple? Perhaps it became overgrown with dense vegetation. 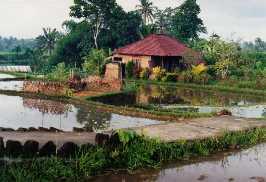 Early mornings are pleasantly cool, and the local people seem more friendly then; perhaps it's just that the people who work in the tourist industry are not yet out and about. Perhaps that's unkind? 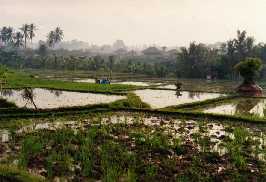 Another early morning view over the rice paddies of Ubud. 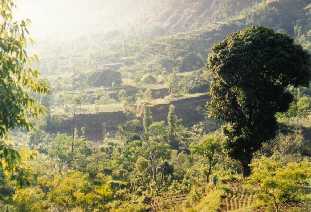 On the slopes of the giant Batur caldera

Some of the trees bear fruit. One wonders if all the trees that can be seen here have some economic purpose, whether every one was planted, or do some grow wild?

The time of day was mid-morning I think. 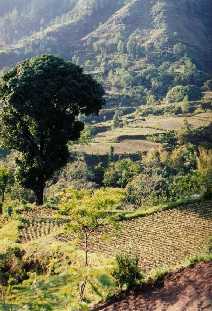 Similar to the last photograph, but this one better shows the cultivation in the foreground.

How much work must have gone into leveling those fields!

The altitude of the Lake Batur area gives it a more pleasant climate than lowland Bali; while certainly not cold, it was possible to enjoy climbing a mountain. 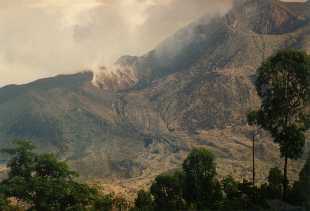 This volcano is roughly in the centre of Batur caldera. The active crater on the side of the mountain was very impressive up close. There was a continuous roar of escaping steam, punctuated by a louder and more ominous rumble periodically. One could feel the ground vibrating, and there was the acrid smell of sulfur dioxide in the air; strong enough at times to make one wonder whether breathing might become difficult if the activity picked up. 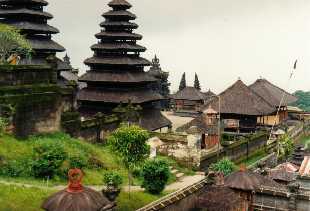 The most important Hindu temple on Bali is Besakih on the lower slopes of Mt Agung.

However, while it is big, spread over a large area, and special to the Balinese, I found it less pleasant to visit than some of the smaller, less formal temples. 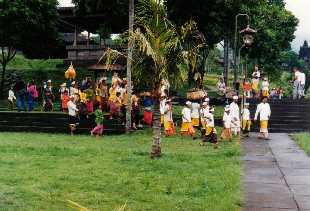 Hindu ceremonies in Bali, in my experience, are always very colourful. We happened to see this one in Besakih. 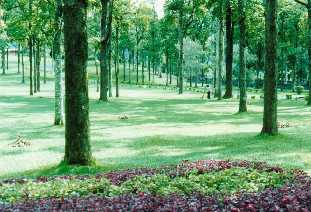 The botanical garden at Candikuning in the mountains was a great escape from the numerous people that were to be encountered most places.

Perhaps the locals come to the botanical garden on weekends and public holidays, but they weren't to be seen while we were there. 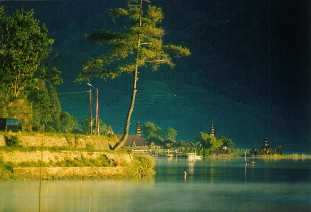 Seen on an early morning walk beside Lake Bratan in the highlands of Bali.

I remembered this area from my first trip to Bali in 1973, but it was very difficult to place individual features. There had been many changes in twenty-one years. 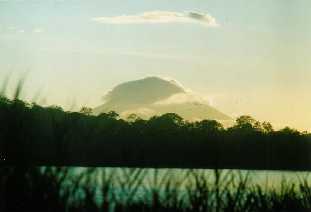 This highest mountain on Bali is very important to the majority Hindus.

Its last serious eruption was in March 1963. 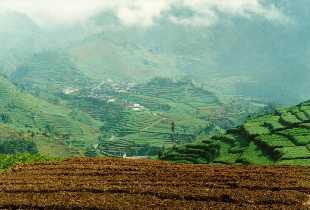 The Dieng Plateau is one place in Java where one can escape the heat. There can, however, be a cost: the very unpleasant loud Islamic calls-to-prayer that come five times a day, starting in early morning and finishing in the evening.

I believe that Islam uses the human voice for the call to prayer because Mohammed didn't like the sound of church bells. I wonder whether he would like the modern-day recorded and amplified calls any more than he liked church bells? 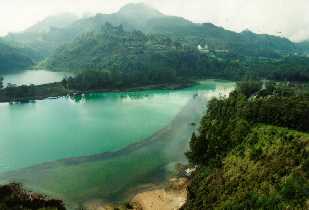 The Dieng Plateau was one of my favourite places in Indonesia. The lower temperatures were a large factor in this, but it was also beautiful and fascinating. This lake, seen on an early morning walk, was sulfurous from the almost ubiquitous volcanic activity. 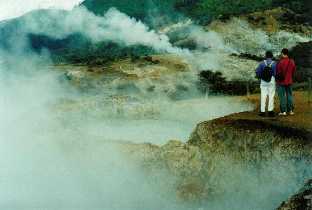 Boiling-mud pools and fume vents were scattered about on the plateau. 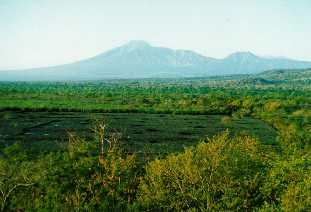 Baluran National Park in north-eastern Java is out-of-the-way and not visited by many tourists. Accommodation is available, but no meals - take your own. Arrange for some-one to pick you up before you go because you'll probably find no-one at Baluran who speaks any English.

It's worth a visit, native vegetation (and some pretty bad infestations of introduced Acacias), a few species of native animals, and some interesting walks. But it is very much 'do it yourself'. 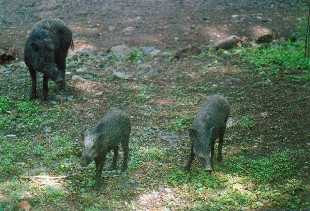 These wild (feral?) pigs came in close to the accommodation block to pick up any scraps that they could find.
Home
Top